Just to let you know.  Please give us (the Association and the State) 30-60 days before checking on your hours.

The latest issue of Water Writes! 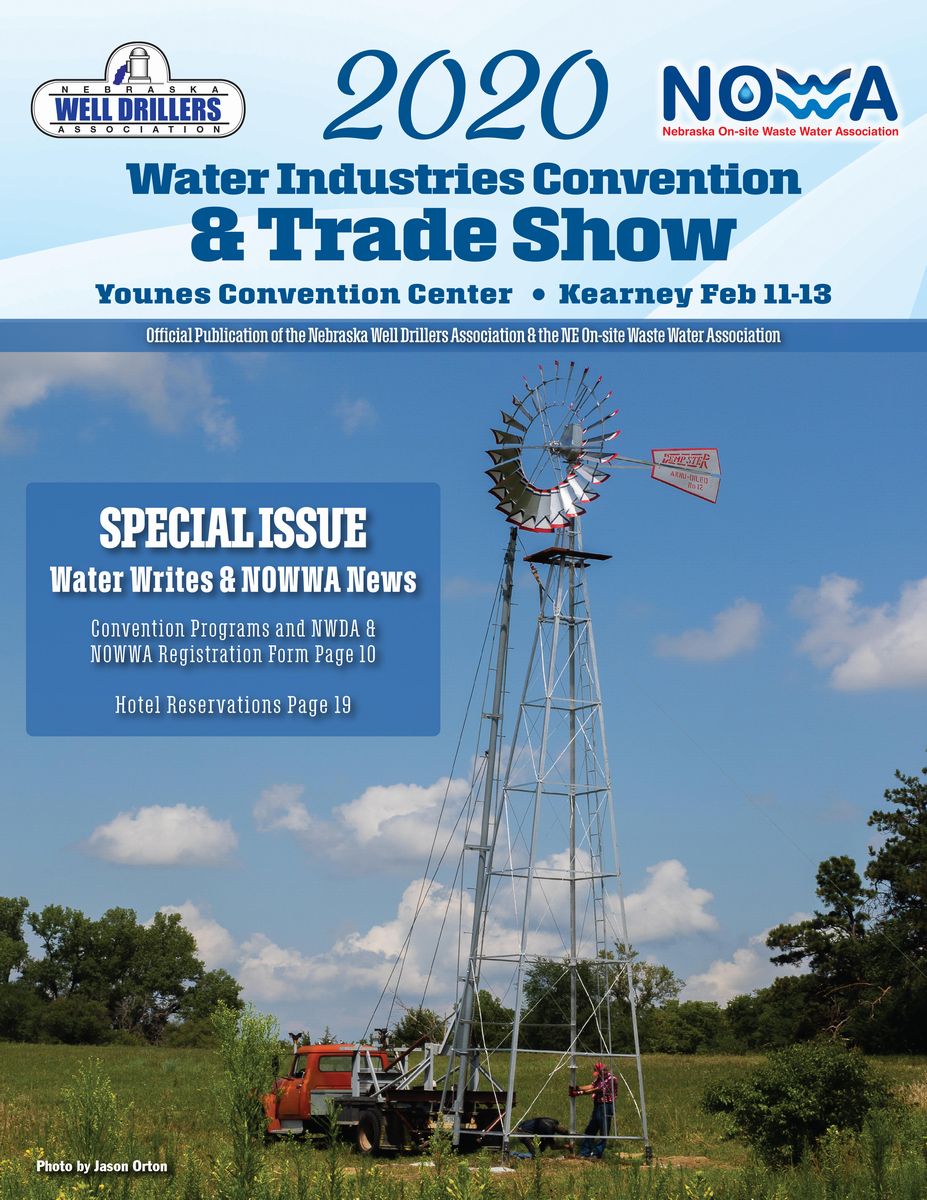 Click on the cover to open a digital copy
Agenda, Registration Information, and Lodging information are contained in the magazine.

Magazine cover photo:  We are aware that the person putting the windmill up is not a licensed contractor/driller.  This Windmill is purely a front yard decoration and serves no purpose beyond that.  That being said...we would love to come and take photos of your projects to use for magazine cover photo.  Unfortunately, we only have one photographer (me), so photo opportunities will be limited.  If I'm going to be in the area of your project I'd love to come to take a few photos.  You will be allowed to approve said photos and will be given a copy of the photos for your use.   Just drop me a note at jason@h2oboy.net


Award to Honor Mr. Orton’s Contributions to the Groundwater Industry


(WESTERVILLE, OH — September 25, 2019) Lee Orton, J.D., President of Orton Management Association in Lincoln, Nebraska, will receive the Ross L. Oliver Award from the National Ground Water Association (NGWA). The Ross L. Oliver Award is NGWA’s most prestigious award and is presented to those who have made outstanding contributions to the groundwater industry.
The award will be presented to Mr. Orton at NGWA’s Groundwater Week in Las Vegas on December 5, 2019.
After graduating from law school, Orton began his career in the natural resources and groundwater industry by developing the State Water Plan of Nebraska in 1969. Shortly after, he became the first Executive Director of the Nebraska Association of Resources Districts (NRD) where he successfully managed the merging of 153 local government groups into 24 natural resource districts.
After a decade with NRD, Orton began his private law practice where he played a pivotal role in the Nebraska well drilling industry.  Working with the Nebraska Well Drillers Association, Orton would draft and help pass a new law through the Nebraska Legislature which created a well professional’s license and a state-level governing board to oversee the licensing process.
Orton would go on to become the first Executive Director of the Nebraska Well Drillers Association where he would be hired by the state government to draft new rules and regulations of well drilling licensure.
As a member of NGWA, Orton has proved to be an invaluable resource and advocate for the industry. Orton was instrumental in the formation of NGWA’s Government Affairs Committee as well as organizing the first Washington, D.C. ‘Fly-In’ which allowed NGWA members to directly lobby their lawmakers.
Orton remains one of NGWA’s strongest advocates in state and federal government affairs.
“Lee has the aptitude and demeanor to bring those from all water disciplines – surface and groundwater, contractors, scientists, engineers, consultants, etc. together with regulators and politicians to navigate the legislative processes at the state and federal level for the wise and beneficial use of the resource. He has (still is) dedicated his entire career to the beneficial management of our most precious natural resource, water!” stated nominator Thomas Downey, CWD/PI, President of Downey Drilling Inc and Past President of NGWA.
Orton obtained a Bachelor of Science in Business and Juris Doctor from the University of Nebraska Lincoln.
In addition to his participation in professional associations, Orton is active in the Nebraska Statewide Arboretum, Gateway Sertoma Club, Zodiac Discussion Club, and various other community organizations.
When not serving the groundwater industry or his community Orton enjoys playing golf, travel, and historical research.
For more information or additional comments please contact Ben Frech at bfrech@ngwa.org or call (614) 898-7791; ext. 1570. The National Ground Water Association is a not-for-profit professional society and trade association for the global groundwater industry. Our members around the world include leading public and private sector groundwater scientists, engineers, water well system professionals, manufacturers, and suppliers of groundwater-related products and services. The Association’s vision is to be the leading groundwater association advocating for responsible development, management, and use of water.​

The Nebraska Well Drillers Association has a long tradition in the groundwater industry in Nebraska. It was established over seventy-five years ago and nurtured by key industry leaders along with academicians from the University of Nebraska.

The NWDA has served the industry by providing technical training, new product exposure, idea sharing and fellowship among the members. The organization represents businesses and industries as well as technicians dealing with water well drilling, pump installation, manufacturing and the supplying of equipment and material for water well work.

The NWDA has also become a significant voice in legislative and regulatory affairs of the State of Nebraska.